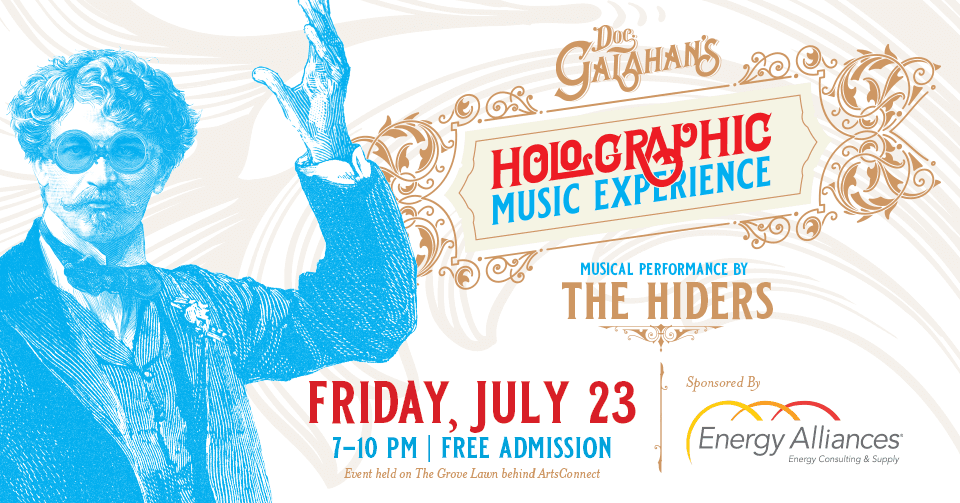 Experience a concert unlike any we’ve designed before! The Hiders will debut the release of their 8th album, “Forever at the End” on the patio of the Grove. While the band is playing, guests will be invited to travel to a tree lined area of the venue, virtually approaching Doc Galahan’s world of wonder. The world will consist of interactive artworks with hologram, 3D, and lenticular characters. Food truck items, concessions, beer, wine and seltzers will be available for purchase. This event will be viewable live on Waycross. Purchase a hologram prism for your cell phone for just $5 to take the holographic experience with you. Rainout information: 513-522-2108, option 4.

About the Art and Artist

Doc Galahan is a Cincinnati-based pseudonymous artist, printmaker and writer who reimagines 19th century engravings into a menagerie of steampunk creatures, autonomous beings and experimental curiosities. This exhibition is a first act, an introduction of the characters and the setting of an alternate Victorian-era Cincinnati renamed as Queensgate. It is a first step in a larger tale, which Doc explains is about a world similar to our own: "A world split down the middle, plagued by civil war and fractured between those who are human and those who are supernatural. It is a warning from a world too afraid and too proud to overcome and ultimately embrace their differences".

With this first exhibition, Doc Galahan has taken 25 prints and has re-imagined them by presenting them in various visual formats: Anaglyph 3D prints, Lenticular prints and Holographic installations. Each of the 25 original prints will also be on sale on various, exquisite papers at the event.

This exhibition is the first step in a journey in which Doc Galahan will be revealing his story through art and literary releases over the course of 2021 and 2022. Proceeds of the art will be used to fund the production of a graphic novel: Doc Galahan's Arcanarium: Book I: The Queensgate Plague

Learn More about Doc at: DocGalahan.com

Tennessee Williams once suggested that “Time is the longest distance between two places” but for The Hiders time exists “All at once and never again”. The latter quote is from the title track of their upcoming 2021 release ‘Forever at the End’. The title is inspired by the effect of an Event Horizon, named such for being the boundary defining the region of space around a black hole from which nothing ( not even light ) can escape - a singularity - a horizon beyond what we can see. Cryptic, I know. Some things are harder to describe and best perchance experienced.

Formed officially in the early days of the 21st century in Cincinnati, Ohio, The Hiders 2004 debut ‘Valentine’ was met enthusiastically in the realm of Americana. Their sound, described often as an intriguing mix of folk, rock, and psychedelia, filled the remaining open spaces between the likes of Neil Young and Sparklehorse, or even the twilight separating Gillian Welch and Black Sabbath.

Over the course of six albums members have come and gone so The Hiders act informally as a duo, featuring founder and vocalist/guitarist Billy Alletzhauser and long time co-vocalist Beth Harris, bringing in musicians as needed. The two met performing together in a production of ‘Hedwig and the Angry Inch’ and have never looked back. Their vocals blend together seamlessly, less a duet and more one voice, and is the bedrock of their sound.

As of 2021, The Hiders record, mix, and produce their own music almost exclusively, giving an even more unique twist to their robust yet ethereal brand of  roots inspired rock.

Learn More about the Hiders at: TheHiders.com

Recently collaborating on the design of their 8th album, Doc Galahan and Hiders decided to marry their "covid creations". They saw similarities in story, depth and messaging between the two works and knew they wanted to do something beyond an anaglyphic design for the new album. This event is a celebration of those two works.